The main focus of this chapter is Renzo's visit to Azzeca-garbugli, the lawyer who Agnese suggests might be able to help solve his problem (that being the edict that has been posted forbidding him from marrying Lucia). Renzo arrives at his house, armed with two chickens to pay the lawyer, and prepared to get the matter solved. At first, it seems that Azzeca-garbugli is going to be able to help Renzo, as he begins to show him edicts that might be helpful in his case. However, as Azzeca-garbugli starts spouting off more and more Latin, Renzo begins to get more and more agitated. He brings up Don Rodrigo (who is the very reason him and Lucia cannot get married) in a disrespectful manner, as he's lost any sense of propriety at this point and is speaking rashly. Azzeca-garbugli does not respond well to this, and kicks Renzo out of the house without helping him.

Chapter three's main point is the conversation between Renzo and Azzeca-garbugli. The purpose of using two word clouds was to compare what Renzo talks about (brown word cloud above) and what Azzeca-garbugli talks about (black word cloud below). In picking what words would be removed from the final word list, I decided to combine verbs into the infinitive unless they were used in only one tense. I also decided to get rid of all of the words that were only used once since they were not used sufficiently in the chapter in order to be represented. The result was a word list for Renzo's words that totaled at 36 words, whereas Azzeca-garbugli's words totaled at 110. However I felt that this was appropriate because that is the way that chapter is balanced; Azzeca-garbugli does most of the talking and its frequently just for the sake of hearing his own voice.

So, are Word Clouds Helpful?

Names: what kind of importance is placed on each character in reference to how often their names are mentioned? Is it important?

[Click on the  following images to make them larger]

Close readings of the texts bring about some interesting discoveries. I decided to work with the very first paragraph of the chapter, since it is the reader's first introduction to the chapter. I was disheartened by the translation (and thankful that the print translation that we read in class was translated much better). To be quite frank, reading the translation at times feels like reading a GoogleTranslate version of I Promessi Sposi (which I can only imagine has Manzoni rolling in his grave). There are a few word choices, such as as using "sorrowfully" instead of "anguishedly" (because according to Wikipedia, anguishedly is antiquated and no longer used) for the Italian "angosciosamente". The greatest issue I have with the translation is the gross misrepresentation or grammatical blunders. For example, when the translator changes the text to portray Renzo and Agnese as being "displeased" with Lucia rather than just concerned. Even worse, when the translator changes "Tutt'e due si volsero a chi ne sapeva piú di loro" to "both turned toward her from whom they expected...", making an incredibly awkward and incorrect sentence.
Simply by doing a close reading of the first paragraph, one can take a guess as to why there is such a discrepancy in the number of times each person's name is said in the Italian vs. the English. This chapter gets rather complicated linguistically, with Azzeca-garbugli speaking so quickly and oftentimes interjecting in Latin. Trying to find sections of his speech in the Italian that matched with sections of his speech in English proved rather difficult, as one can imagine that if the simple first paragraph of the chapter was translated so incongruously, the lawyer's complicated speech gets even more convoluted.

The biggest connection we make within the chapter is one that gets expanded as the novel progresses. Chapter 3 is the first chapter in which we are really privy to the immaturity and lack of restraint that Renzo has. He is rash and impatient, and lets miscommunication get him flustered. This attitude does not help him get anywhere. Chapter 3 is where the novel sets up Renzo's potential for development. As the main character, we hope to see him grow and develop. It isn't until Chapter 3 that we get a glimpse of where that change might happen (or where we hope it happens). By the end of the novel, we hope to look back on the novel and be able to compare him to how he was in Chapter 3 (hence where the connection expands to becoming a connection with the rest of the novel). 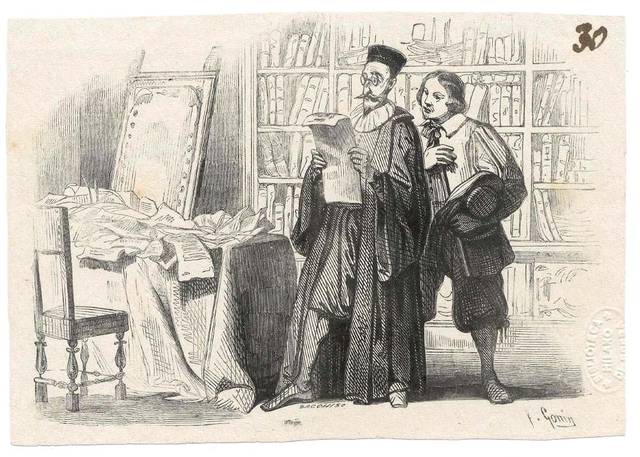 With the Rest of I Promessi Sposi

http://www.catherinecollegelibrary.net/images/middlton.gif
The main connection that can be made between this chapter and the rest of the novel is the connection with Latin. Latin is used throughout the book, sporadically in the form of edicts and official documents, as well as used by people of power (aristocracy and the church). It is always used in a manner that highlights the differences between those in power and those of the lower classes such as Renzo. However, most of the time Latin is depicted negatively. First, in Chapter 3 when Renzo is incredibly confused by the Latin, it makes him feel small. And then throughout the book with similar results. This "bad Latin" is discussed at the end of the novel (and differentiated from "good Latin") when Renzo tells Don Abbondio that "That's not the sort of Latin I'm afraid of. That's an honest, holy sort of Latin like you get at Mass; [...] No, no; I was talking about that blackguardly, out-of-church Latin, which creeps up behind a man in the middle of a conversation" (p.709, Penman 1972 transl., Penguin Books). Latin throughout the novel, beginning in this chapter, "creeps up behind a man" and takes advantage of him. It is never portrayed as helpful or kind to the lower class.

With the Visit to the Spencer Research Library 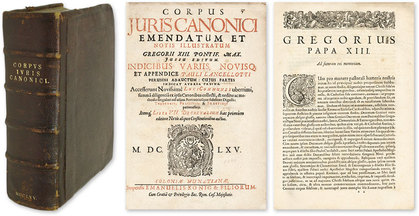 http://img.zvab.com/member/u7066n/7139261.jpg
This chapter has quite a specific connection to the research library, as one of the books that we got to look at was a law book entitled Corpus iurius canonici emendatum et notis illustratum (which looked similar to this image, although this image is not a picture of the book found at the Spencer). This book was massive, and held a great amount of laws, with subpoints and all sorts of complicated language. It was easy to imagine what Renzo felt like when Azzeca-garbugli was spouting off in Latin from a wide variety of giant dusty books.

One of the components required for the final project of this course is to have a conclusion that "addresses at least one concern raised in the course blog entries". As such, I would like to discuss a blog entry that I wrote (albeit it has very little to do with Chapter 3, although it does tie into my response). The blog post read as follows:

"As I look at my calendar, I realize that we are quickly approaching the end of the semester (which seems unbelievable for many reasons, including the fact that it feels like we still have quite a bit to read in order to resolve many of the characters' problems!). Throughout the semester, I've kept expecting for all of it, the digital humanities and Manzoni's novel, to all come together in an "aha!" moment, a moment of clarity where it all clicks. ....I seem to still be waiting.
So I ask myself (and my classmates), how does it all come together? Will we reach this "aha" moment in the upcoming weeks, where Manzoni's novel and the digital humanities come together in a way that can be represented which is not only visually appealing but also informative? (I certainly hope so, since that will be the goal of our final portfolio!) Or is the concept of welding together the digital humanities with 19th century literature something that one has to continually push towards? It feels as though we are only beginning to get a grasp on how to commence expressing our ideas and Manzoni's novel accurately through the use of digital tools. And yet, we have been working on this project for close to four months now.
I ask these questions almost rhetorically, in hopes that the next few weeks provide at least some answers. Yet I can't help but feel that a semester does not seem to be quite enough time to cover such a growing and relatively new way to think about literature."