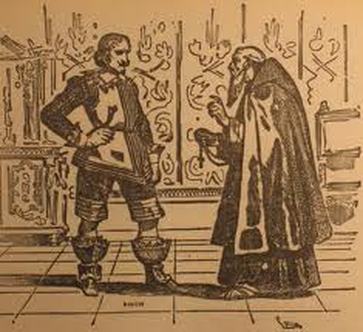 Chapter six revolves around Fra Cristoforo and his attempts to help Renzo and Lucia. In this chapter, we have the first big power struggle conversation between two characters-Don Rodrigo and Fra Cristoforo. This theme will continue throughout the book. In this chapter it is only one of the instances in which there is a struggle between characters representing the church and state.

I Promessi Sposi takes place is northern Italy in the late 1620s. Manzoni, however, is writing two hundred years later in the 1820s. It seems likely that the novel could be a commentary-at least in part-on the unification of Italy and the issues that accompany such a process. At the time he was writing, many of the surrounding countries had a hold on at least part of what would later become Italy. This is very similar to the state of the peninsula in the 17th century. At that time, the Spanish were the big rulers of the land. For this reason, a connection is easily made with the rule of Don Rodrigo over the area in which the story is set.

This word cloud is a compilation of words from chapter six of both I Promessi Sposi and The Betrothed. Using Voyant (http://www.voyant-tools.org), a program for textual analysis, I was able to get word counts for the words in each chapter and remove stop words. I did this for both Italian and English. From there I included words with frequencies of six and higher in my data for the word cloud generator. After analysis, I also included variations of words appearing six or more times. Detto, for example, includes all past forms of dire.

For the creation of the word cloud, I used the advanced option on Wordle (http://www.wordle.net). For emphasis, I have put Italian words in blue and black and English words in purple and gray. This was done by adding the hexadecimal code to the end of each word and word count. Color denotes words of interest.

I have added additional information--such as word count and reason for highlighting--by using Speaking Image (www.speakingimage.org), a website that allows users to enhance images by adding pop-up text boxes which appear when the user moves his or her cursor over the word.

Because this chapter included the heated conversation between Don Rodrigo and Fra Cristoforo, many of the words I have highlighted are different words referring to speech. I thought it was interesting that the English version seemed to include a wider range of words referring to the type of speech given. For example, "continued" was included four times but "continuò" was included only once. This was also the case for exclaimed (six) and esclamò (three) as well as others.

Another interesting difference I found was the use of courage. This word was included six times in the anonymous version of The Betrothed but only once in I Promessi Sposi. 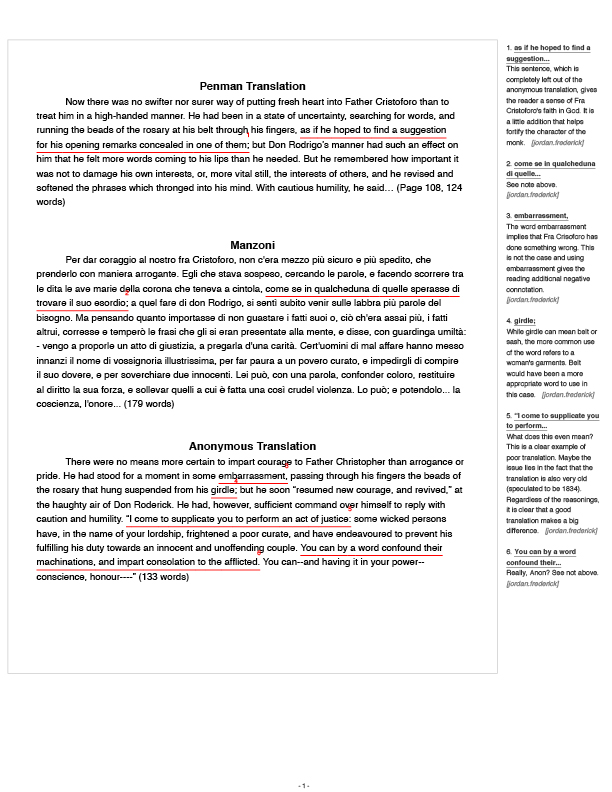 Photo credit: Spencer Museum of Art. Accession Number 1976.0051
"Don Rodrigo, as we said before, was pacing with long strides across the great room where the portraits of his ancestors, for many generations back, hung on the walls. When he reached the wall at one side of the room and turned around, he came face to face with an old warrior, once the terror of his enemies and of his own soldiers alike, grim-faced, with short, bristly hair, moustaches twisted into points which stood out past his cheeks on either side, and chin thrust obliquely forward" (Manzoni, 130). While I do not think these paintings would fit into the great hall Manzoni describes, I do think it is possible that something like the muses could be in room like the one mentioned in chapter six when Don Rodrigo and Fra Cristoforo argue. The muses provided a nice representation of settecento artwork.


Connections to the Spencer Research Library
Like the art museum, the Spencer Research Library trip can also be connected to chapter six. Many of the books that we examined were from either the time period in which Manzoni was writing or the time period he was writing about. These books provided us with a clear example of objects that could be found in either of the homes we come across in this chapter--Don Rodrigo's or Lucia's. The visualization afforded to readers who take the time to examine a book from either of these periods would be beneficial in accurately constructing a mental picture from Manzoni's words.


Connections to the rest of the book
The book contains several scenes of power struggles in the form of intense and uncomfortable conversations. Some of these could represent struggles between Church and State, Italy and Spain (outsiders) and Educated and Ignorant. Like the argument between Fra Cristoforo and Don Rodrigo, each of these intense conversations have something to teach us. 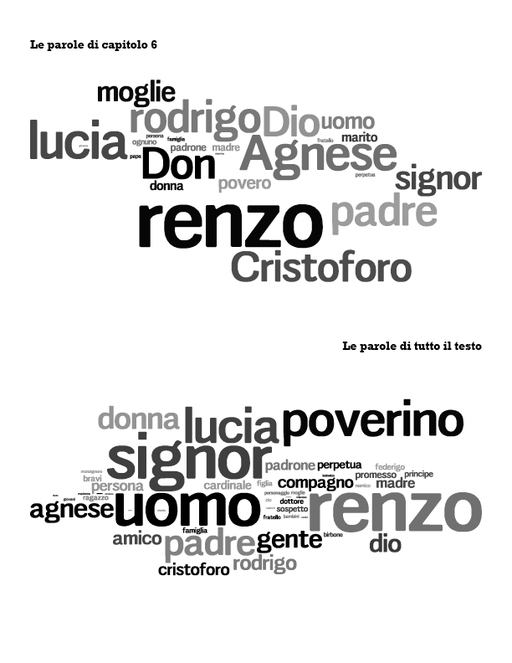 My word cloud is made up of the people. I have created two clouds to compare chapter six with the book in its entirety. All words were excluded unless they were a name or a person related word. This means that words like “mamma” or “papa” were included. Words that were excluded from the list were all verbs, adjectives, adverbs, prepositions, conjunctions and interjections. I felt that this would allow the reader to see which characters are the focus of chapter six and how that plays in with the novel as a whole.

This semester long project has been many things; exciting, frustrating, challenging and then frustrating again. Now that we have come to the end of the semester, I can say without question that this class was one of the most interesting classes I have ever taken. I don't know how much help our project will be to other readers, but I know I have learned way more about the book by diving into different forms of analysis.


One thing that I think we have all learned is the importance of a good translation. When possible, the original is always best but if you must read something translated, it would be a good idea to pay the three dollars for the translation on your nook instead of just downloading the free version.
*All English citations are from the Bruce Penman translation unless otherwise specified.